Finding Love: Which Reality TV shows would we head on to get a partner?

When it comes to looking for love, there are many options we can turn to in the search for the perfect partner.

In 2021, popular methods include swiping on dating apps, braving conversation with a potential partner in a bar or club, or even partnering up with a co-worker. However, after a year of lockdown many are now finding it’s more of a challenge for single people to be meet up with each other or even head into the office, and so some of those looking for love may be willing to try something a little different…

For singletons sick of having to swipe left or right on total strangers, somewhat unconventional methods such as heading onto a reality dating show may actually feel like a more appealing option. But does going on TV help us find a partner? And which shows give us the best chance of finding love?

At Hunkemöller, we were eager to delve a little deeper on the subject, and so we analysed ten popular UK dating shows to determine which would give those considering applying the best chance of finding love. We also quizzed Brits on their attitudes towards today’s reality dating shows to learn more about their thoughts on this modern method of finding “the one”.

If you’re looking for love, apply for a Netflix dating show

Of all shows compared as part of the research, Netflix’s, Love is Blind, was found to have the highest success rate, with a third (33%) of the couples featured so far still together after filming has ended.

Another Netflix show included in our study was Too Hot to Handle, which came in at second place. Perhaps the show’s premise of banning intimacy is the way to go, as 30% of the couples that met on the popular show are still together. Meaning if you’re looking for love, and want to find it while on a tropical holiday and spending a month in your swimwear - you may be in luck.

If you want to combine dating with a holiday in the sun, then perhaps Love Island could be a good bet in the search for love, with more than a quarter (27%) of couples matched on the rather steamy ITV show still together at the time of writing. Additionally, the popular TV series has also led to four marriages and five children so far, making it the best bet for potential applicants looking to start a family or tie the knot. 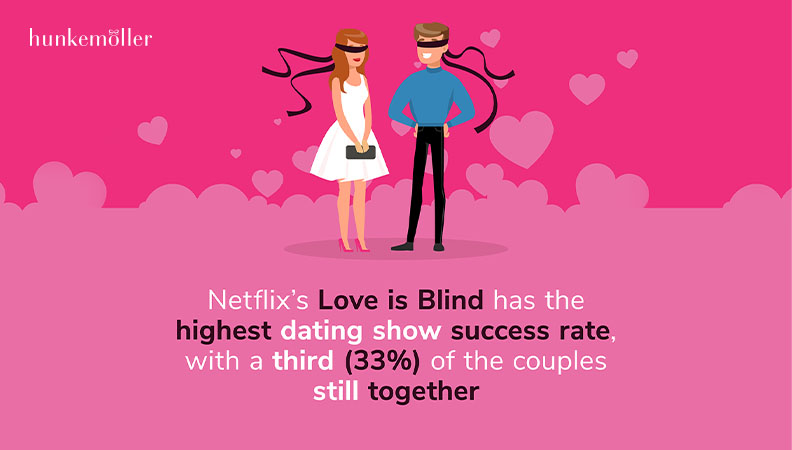 On the other end of the scale, those looking for long term love may want to give Dinner Date a miss, as despite running since 2010, the show was found to be the least-successful reality TV dating show, having only matched up one long-term couple in more than a decade – we don’t fancy those odds!

And unfortunately, even being bold and baring all while on TV doesn’t work, as just 2% of Naked Attraction couples have been able to go the distance. It seems that judging your potential partner based on their body isn’t a formula for success. So maybe it’s best to keep your underwear and clothes on when meeting your partner for the first time.

Similarly, although we love the rapport amongst Fred and the First Dates team, the show may be one to skip if on the hunt for true love. Sadly, despite more than half (56%) of couples paired up on the show voting to go on a second date, just 3% have stayed together long term. 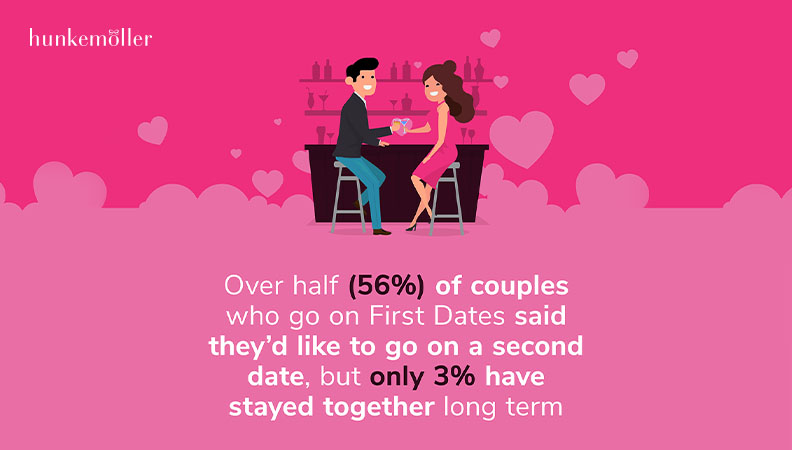 Which shows would we apply for to find a partner?

When asked on their thoughts on reality dating shows mentioned in our romance themed study, more than two thirds of Brits stated they preferred to meet their love interests ‘the old-fashioned way’ and would rather not head on TV to find a relationship.

However, this isn’t the case for everyone as more than half (56%) of 25–34-year-olds said they would definitely consider going onto a show in the hope of finding true love, making them the most likely age group to explore this means of dating.

Love Island was found to be the most popular venture with this age group, as more than a quarter (28%) confessed that they’d happily apply for a place on the show – you may wish to stock up on that swimwear before you do!

Overall, Love Island UK was found to be the most popular TV show amongst UK adults, with one in eight (13%) confiding in us that they’d consider appearing on the series in order to meet a partner. However, for those looking to apply in 2022, it might be a good idea not to get your hopes up just yet! The show is so popular amongst potential contestants that the chances of getting through the application process in the first place are extremely slim, with would-be Islanders reportedly have a 0.007% chance of actually making it onto the show1.

Other popular reality TV dating show choices amongst those in our study included Married at First Sight UK (12% said they would go on this), First Dates UK (11%), Love is Blind (9%), and Dinner Date (9%).

Although it’s the most popular choice amongst Brits, it’s speculated Love Island is losing popularity after a drop in audience numbers last year2, which was somewhat reflected in our survey findings. Perhaps surprisingly, the show was not found to be the most popular with 18–24-year-olds arguably the group most likely to watch this show.

Coming in top with 18–24-year-olds was Married at First Sight UK, as over 1 in 5 (22%) would consider getting married to a stranger in a bid to find a partner. With a 16% success rate, it may be a good option for those seriously wanting to settle down and look at marriage options.

For older singletons, First Dates came in top choice as one in twenty (5%) of those over 65 would like to head to the restaurant to find love.

And when comparing men vs. women, men were found to be much more eager in appearing on these shows, with over a third of men (37%) being willing to go onto a reality dating show versus three in ten (29%) women. 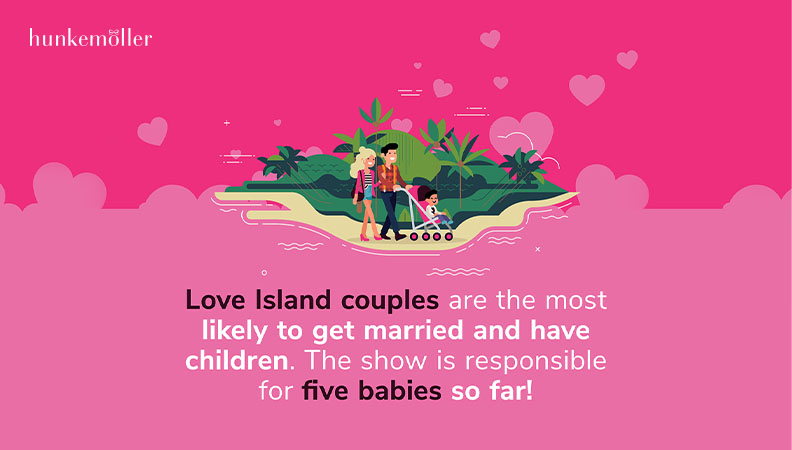 But how do we feel about these shows?

When to comes to how the nation feel about these love-themed shows, it appears that Brits have rather mixed opinions. Despite Love Island UK being the most popular choice when looking for a partner, just 6% feel the show gives a positive representation of love and relationships.

And despite having a low success rate, nearly a fifth (17%) of Brits stated that First Dates UK gave the most positive representation of love and relationships, making it the clear winner in this category.

Sexy Beasts (3%) and Ready to Mingle (3%) received the least votes on this front. Considering that ITV’s new dating show Ready to Mingle involves contestants lying and possibly cheating on their partners3, it’s perhaps not surprising that Brits don’t see it as #RelationshipGoals.

Sadly, almost two thirds (65%) of those surveyed shared they don’t believe any of the UK dating shows mentioned showcase love in a positive or realistic way.

It’s great to see that some reality dating shows do lead to happily ever-after, and so if you’re wanting to head on television to try to find your soulmate, you could be in luck. Although you may have more of a chance of finding a partner in the office, you don’t have to write off these less conventional methods just yet.

However, most of us would rather just watch the shows instead of participating, as the majority of Brits would like to find a relationship in more of a traditional way. Despite younger age groups being more willing to apply for dating programmes, they do not hold a very high opinion of them as many think that these shows don’t show love in a positive or realistic way.

At Hunkemöller, we want people to feel empowered and confident whether they’re single or in a relationship. It's important that anyone choosing to look for a partner, focuses on finding someone who makes them feel happy and comfortable – ultimately a partner should help bring out the best in you, and you in them.  It’s great to see that those who do want to find love through reality TV are seeing some success. Of course, it’s not for everyone and that’s fine too - those who feel this isn’t for them don’t have to deviate from their preferred dating styles. 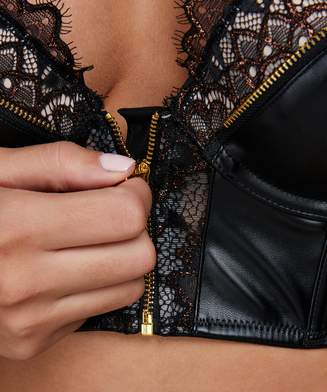 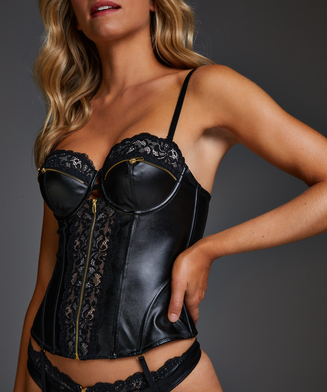 Survey data correct as of 27/10/2021 and taken from a sample of 2,000 UK adults. Hunkemöller compared 10 popular UK dating shows for this study, comparing the following elements:
Number of episodes
No. of couples that entered the show (where applicable)
Couples at the end of the show
Couples still together now
Success rate %
No. of marriages
No. of children